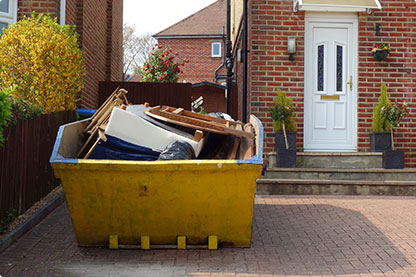 These days we all know what a ‘skip’ is – a large open-topped waster container designed to be removed by lorry as opposed to being emptied into a bin lorry – but did you know where the word ‘skip’ comes from? Read on to find out along with 4 other facts about skips you didn’t know you didn’t know.

Where did the word skip come from?

The word ‘skip’ originally came from the old Norse (or Scandinavian) word ‘skeppa’ meaning ‘basket’. The North Germanic peoples of the Early Middle Ages began an emigration in the 8th century bringing with them their language and culture. The word ‘Skeppa’ was absorbed into old English as the word ‘skep’ which eventually became the word ‘skip’ as we’re familiar with today.

Why are skips the colour they are?

When skips started to become commercially available and popular, the UK Highways Act imposed regulations on skips. These regulations said that skips should be visible in the dark and the colour that was regarded as the most easily visible in low light was yellow. However, these days, many skip companies choose to use colours that more closely match their business colours and their skips are made more visible using lights and cones.

What are the restrictions on placing a skip?

Skips placed on a public highway must be licenced or permit and have the required safety lights and markings. Otherwise the skip company could face a fine up-to £1000. Also, to obtain this permit, you must be an authorised Skip Hire Contractor. The licence is obtained from the Local Highway Authority as required under section 139 of the Highways Act 1980 and last for a maximum of 15 days. These regulations apply to Sheffield skips & Rotherham skips so variations may apply around the other local authorities in the UK. Skips placed on private land don’t have the same restrictions.

Why do skips exist?

Basically, convenience but also cost! Isn’t it much easier for people to simply fill up a large container and have someone take it away for them? It’s also often much more economical to allow a company that specialises in waste recycling, such as Mr Rubble in Sheffield & Rotherham, to deal with your waste as they have the scale and facilities to deal with it effectively and on a large scale.

When were the first skips introduced in the UK?

Prior to 1960, some companies used carts or wagons that had an almost identical function as skips. The introduction of builders skips as we know them today in the 1960s coincided with the widespread availability of portable machinery that was able to lift and shift the weight.

Back to all blog posts
Trustpilot